Designing transmission with a long-term vision

Federal, regional and state entities have long recognized both the need and the benefits of investing in new regional and inter-regional transmission systems – and of designing those systems "smart from the start." These entities have encouraged the development of transmission systems through adoption of various laws, policies and planning initiatives.

Since its inception in 2005, the TWE Project has been carefully planned in alignment and collaboration with leading transmission/electrical infrastructure planning groups. This work assures that the multibillion-dollar TWE Project:

The TWE Project represents the type of right-sized, renewable and regional transmission envisioned in multiple federal and regional policies and studies to connect the West's most productive onshore renewable resources with the markets that need them. 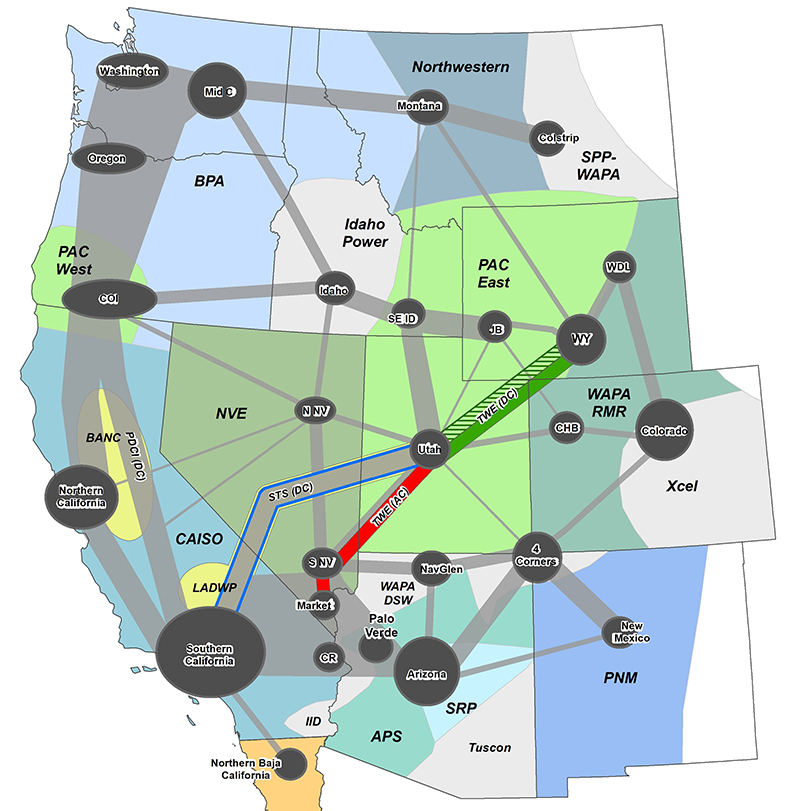 A pipe diagram of the Western Interconnection shows that the bulk of the existing transmission capacity, shown in gray, is built along the coast in a "C." It also shows there is limited capacity between the California/Desert Southwest and Intermountain regions. Limited capacity means there is limited access to both diverse renewable resources and to diverse load areas. However, adding the 3,000 MW DC line system and 1,500 MW AC line system of the TWE Project vastly expands the ability to directly and efficiently exchange renewable resources between regions.

The Western Electricity Coordinating Council (WECC) is the primary entity responsible for coordinating and promoting bulk electric system reliability in the Western Interconnection. In 2010, WECC initiated a Regional Transmission Expansion Planning process that was funded in part by the U.S. Department of Energy. The first report was WECC's 10-Year Regional Transmission Plan, issued in 2011.

In 2014, the economic benefits of investing in new direct current transmission between California and Wyoming were confirmed in a study conducted by the DOE's National Renewable Energy Lab. The study found that the economic benefit of such a transmission line is likely to outweigh the costs, with benefit-to-cost ratios ranging from 1.6 to 3.6. Utilities typically consider a new transmission line project as a worthwhile economic investment if the benefit-to-cost ratio is 1.1 to 1.2.

"California-Wyoming Grid Integration Study, Phase 1- Economic Analysis" compared two basic options for providing California with 12,000 GWh per year of new renewable resources between 2017 and 2020. One option would draw on the California in-state renewable energy resources likely to remain undeveloped by that time. The other option would deliver Wyoming wind power to the California marketplace via a 3,000 MW direct current transmission line. Both basic scenarios were tested in consideration of a range of crucial variables, such as technology cost, capacity factors and federal incentives.

According to NREL, the scenarios show economic benefits exceed costs in the range of $2.3 billion to $9.5 billion over 50 years on a net present value basis. The benefits were primarily due to the difference in generation cost for the various renewable technologies studied, strongly influenced by the fact that Wyoming has some of the highest wind capacity factors in the United States. NREL analysts worked with a technical review committee of transmission experts from California and across the West who provided review and input.

In addition to WECC, there are sub-regional planning groups that exist throughout the western U.S. As an interstate transmission system proposed to cross Wyoming, Colorado, Utah and Nevada, the TWE Project will interconnect with four of the five sub-regions. Therefore, in alignment with the importance of coordinating with these groups, TransWest has participated within the planning efforts of these sub-regions for several years as well.

The TWE Project will be one of the largest transmission elements within the WECC system. It will up to quadruple the transmission capacity that currently exists between the California ISO and the PacifiCorp balancing areas.

The WECC Rating Process is designed to ensure that transmission projects are properly integrated into the existing transmission grid to enhance the overall reliability of the grid. This process for the TWE Project as a DC-only configuration was initiated in 2008, and this process for the TWE Project with a DC and AC configuration was initiated in 2018. TransWest is a WECC member.

In addition, the TWE Project was included in work performed by:

"If you're going to be for renewable energy generation, you have to be for transmission."